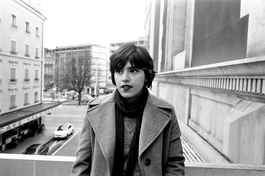 Anahita Ghazvinizadeh (b 1989, Tehran, Iran) is a filmmaker and writer. She got her BFA in cinema from the Art University of Tehran, and is currently a graduate student in The School of the Art Institute of Chicago. Anahita has been a student of Abbas Kiarostami for 5 years, and is influenced by his cinematic style. Being inspired by the rich culture of children’s cinema in Iran, specifically Kiarostami’s work, Anahita started to work on a trilogy of short films with children as the main characters. “When the Kid was a Kid” and “Needle” are the titles of the first two pieces which have been completed. Anahita is also the co-writer of the acclaimed feature film, “Mourning”, which is another project with the theme of childhood and parenthood.

2013 The Award for Best Feature Screenply for "Mounring" from Avvantura Festival, Croatia (shared with Morteza Farshbaf)

2012 Special Mention for "When the Kid was a Kid" from the International Sardinia Film Festival, Italy